skip to main | skip to sidebar

I began to get to know Jeanette over facebook in the last 13 months as she wrote her heart out, sharing her struggles and victories, her fears and joys, and her triumphs over pain.  She wrote about her husband, her 10 children, and her battle with cancer until she went home to be with the Lord on the 7th of this month.  Her words are always an encouragement to me, and I wrote this song when I heard she had gone home.  It is the message she spoke into my heart throughout the last year of her life.

It was never worth it to win before.  -Not to me.  Someone always had to loose that way, somebody usually got upset... I always figured that made "competitive" a bad thing.

Looking back now, I hardly ever won on purpose as a kid.  True, there were places for competition, but only when I was sure it wasn't a bad thing.  The problem with that?  I was almost never sure if it wasn't a bad thing, and when I did win it always came with feeling bad for whoever lost.  Pathetic, I know.

Just recently I got into a discussion with someone about this and after sorting it out and hearing things from his point of view I broke free from something that had held me back all my life.

We had both just come from a race which had been advertised as a "family fun run/walk/crawl" -he had run it and I had watched from the finish line.  He was in the middle of saying something about how he loved the competitiveness of the whole thing, when I said how much I really didn't like it.

Watching the agony that these people went through to win, the disgust or discouragement, the limit pushing, the angry crying when a little kid "lost" was enough to re-enforce the findings of my childhood and I just didn't like it.

He disagreed with me still though and I don't remember much of what he said, but I'm glad that he did it because that was where I began to see "competitive" from a new perspective.

"Being competitive is not about winning, it's about seeing how much you can do."

I went away knowing he was right and not really sure how, but this sentence stuck in my head and after a few days I started to try it out.  The amazing thing is that, not only did I start to find I could do all kinds of things I never knew, but it was all free of the guilt I'd felt before when I'd thought that the purpose of competing was to win, or, to beat the other people.  Then everything I had thought about it before slowly began to replace itself with this thought: "it's not about winning, it's about seeing how much you can do".

You know, God made us and there is no doubt that His work is amazing!  And every time we strive to be all that we can be, we are finding out just a little bit more of His handiwork and power and there is nothing to be ashamed of there, where as I guess at the same time that if you're just sitting back because you don't want someone else to loose, well, you could probably say you're kinda hiding some of God's work and not really helping anyone out in the mean time.

True, if your goal for winning is to put someone else down.... yeah, your motives are probably not in the right place, but who ever said this was about comparing ourselves with each other anyway?  The truth? -comparing is not recommended at all: "comparing themselves among themselves, they are not wise."

Let's go be the people God made us to be, yeah? and when someone does better than you, rejoice in what God has done; and when you do better than someone, you can rejoice, because He's done that too!
Posted by Annie at 11:53 AM 1 comment:

If you want to be great, you need to have a plan 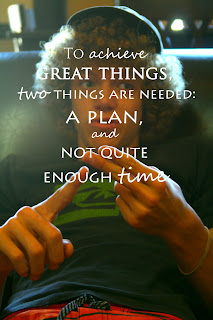 Not getting a parking ticket.
The vast greatness of God that hits you and then shrinks your problems down to size in the moment when you stand staring at the ocean.
Peace.
Coffee breaks.
People letting you know that they're praying for you.
Meetings gone well.
The freedom to be who I am and not try to fit in to a mold that didn't make me.
Tiredness and hard laughs.
A hundred ways to see God in a day.
Food.
Generosity that goes beyond the point of possible return.
Listening ears.

So many random little things to be thankful for in one day. :)  It's amazing how I tend to miss all this stuff when I feel like things are under control.

What kind of a blessing comes from days gone haywire?  This kind.  Ahhh, happiness....  The calm after a storm and joy after a trial always seem sweeter than they were the day before.
Posted by Annie at 8:01 PM No comments:

We do things and wish we hadn't; we say things that we wish we never thought; we think we've learned lessons the hard way, only to find that we're doing it all wrong again....

That's a circle I take over and over again.  Sometimes it's on the edge of burying me in discouragement and then I go around one more time.

We do things we wish we hadn't and He forgives us; we say things we wish we'd never thought and He dries our tears; we think we've learned lessons the hard way....and He still welcomes our confession.  He blots out all of our sins against Him, He holds us in His arms, He forgives us for not resting in Him, He takes our burden, He leads us home.

His mercies are new every morning.
Posted by Annie at 7:16 PM 3 comments:

Floods and droughts
Summer and Winter
Hope and doubt

The crest of the hill
The lifting of fog
The first wind of Spring.... 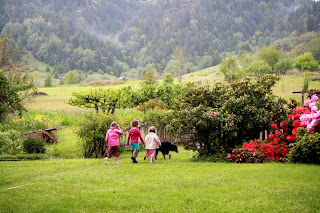 I always wonder about the highs and lows in life. It's when I find myself on a high and realize that there's no ground left under my feet that it hits me again.  I've never ridden on a straight and level line, ya know?  Somewhere in the Christian life I think I've gotten the flavor that I should be on a definite and steady incline; never going down, never deviating....  and then I wonder, is it shameful to be at a low point?  Does it mean I've back tracked?...

When you crest the top of a hill there really isn't anywhere to go from there but down, that doesn't mean that you can't keep going forward though.  No, in fact you do have to go down in order to get to the starting place of the next higher incline.  It's like hiking.  I've got a hunch that the feeling of defeat after reaching a crest and plunging forward is not from God at all, but just a sneaky little trick from the devil.  Broken may be right, but not defeated!

And even if the trip down into the next valley is a fall, it's not about the fall; it's about getting back up again.
...a just man falls seven times, and rises up again...

...he who began a good work in you will carry it on to completion until the day of Christ Jesus. 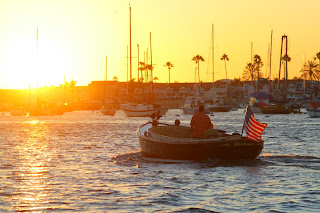 Annie
Office girl, cook, singer/songwriter, big sister, not necessarily in that order... I love life and have hope in Jesus. What more could someone want, right? But I do want more. Sometimes more than anything I want to see every person living and breathing in the freedom that can only come from Christ -It's probably my greatest passion. It's baffling cause it's not something I live in every day or anything; I get distracted, I focus on the evil that makes me afraid, or angry, or jealous... but the freedom is something that I've tasted, and it's amazing! It gives me life, peace and joy in a way that I want to share it with everyone so they can experience it and know it for themselves. Oh yeah, you're probably wondering if star fishes really love you or not.... ok, you're probably not wondering. Yeah, I don't think so either. But they do look kinda happy, and they look like they give good hugs...maybe. :-P Mostly I just couldn't think of a better name for a blog...